Prevention of Communal and Targeted Violence (Access to Justice and Reparations) Act, 2011
The Central Government is all set to rip apart the secular fabric of our nation. Will it be playing the old game of ‘divide and rule’ to secure its victory in upcoming elections?
Our country has evidenced communal hatred, violence and tensions for long. Cause may differ, but the result is the same – unrest in society and betrayals between communities. Can we say that existing laws are insufficient to control communal disharmony? Or, implementation is lacking? Is a new Act really needed?
Aims and objectives:
What the Act really aims at? Is there any hidden agenda to gain political mileage? Answers to such and other questions must be searched for by a secular (in its truest sense) and nationalistic mind.
Provisions:
The short title of the Act is ‘Prevention of Communal and Targeted Violence (Access to Justice and Reparations) Act, 2011’.
Section 3 is the definitions Section. On plain reading of the Act, nothing seems inadvertent or harmful. The provisions made for Committees or Authorities at 2 levels – National and State  may prove beneficial. The Chairperson of such Committees will be the Prime Minister, the Chief Minister respectively. Every State to appoint a person or appropriate number of persons for every district as ‘Human Rights Defender for Justice and Reparations’.
Chapter I is ‘Preliminary’.

The objectives and scheme of the Act appear to be promising. But is the exercise really called for? As will be seen later the existing laws are more than sufficient to achieve all of the objectives the present Bill aims at, if the relevant provisions are duly implemented by police and dutifully enforced by the Courts of law. In fact some of the provisions of this Bill may be counterproductive and defeat the very objective of the Act.
Dangerous Provisions:
Still the Act has something more to offer than discussed above. And it is dangerous and detrimental to secularism. Prima facie we cannot detect the trick. But careful and cautious reading of the ‘Definition’ section, set out in Section 3 of the said Act, will bring the catch in light. This is cure more hazardous than the disease itself!
Definitions of two words viz. ‘group’ and ‘victim’ should be read carefully. I quote them: Sec. 3(e) “group” means a religious or linguistic minority, in any State in the Union of India, or Scheduled Castes and Scheduled Tribes within the meaning of clauses (24) and (25) of Article 366 of the Constitution of India;
and now see Sec. 3(j) “victim” means any person belonging to a group as defined under this Act, who has suffered physical, mental, psychological or monetary harm or harm to his or her property as a result of the commission of any offence under this Act, and includes his or her relatives, legal guardian and legal heirs, wherever appropriate; .
Thus a ‘victim’ under this law can’t be outside the scope of the ‘group’ defined in Sec. 3(e) above. Hence it is crystal clear that a ‘victim’ cannot be from Hindu community.
Can’t Hindus be terrorized? If tomorrow a mob of non-Hindu people attacks a Hindu person and burns down his home, he won’t be able to get protection and benefits from the said Act. Plainly because he does not belong to the ‘group’. Therefore Hindu will always be in a box for trial considering him as a born culprit. It implies that a person from minority community will never be a culprit!
Linguistic minority:
A danger looms over due to the usage of term ‘linguistic minority’. How the framers are going to define it? The peculiarity of our nation lies in diversity. Every state has its own language. Though all of our languages, dialects emanate from Sanskrit, they cherish their own literature and style distinctly. Therefore in a particular state, languages other than that state’s official language, will be in minority. For instance, in West Bengal, except Bengali, other languages like Gujrati, Telugu etc. will be minority. In Tamilnadu all languages will be in minority but Tamil. Already we have territorial parties fuelling secessionist feelings and arousing regional fervor for their selfish motives. This Act will create havoc, when complaints and cross-complaints will be filed across the states to satisfy revenge. Undesirable situation will prevail at the behest of this Act. A serious threat to national integration hovers.
Other provisions:
Once the ‘real agenda’ is clear, the other provisions seem to be highly unjust. The ‘victim’ will be provided with all assistance from the State. Not only legal aid but also monetary support will be made available. The complainant’s identity will be kept secret, if he wishes so. Attachment of property, movable as well as immovable, in cases of fine is provided. Therefore a Hindu will suffer a great loss, as he will have to defend himself on his own and his property will be attached but still he won’t understand at who’s instance he is being tried. See Section 40. Identity of victim and informant to be protected.- The National Authority
shall take appropriate action to protect the identity of the victim or informant at all times.
And also Read Section 87 (4)- (a) not mentioning the names and addresses of the witnesses in its
orders or judgments or in any records of the case accessible to the public;
(b) issuing directions for non-disclosure of the identity and addresses of the witnesses;
(c) immediately dealing with any complaint of harassment of a victim, informant or witness and on the same day, pass appropriate orders for protection;
Now let us see what is ‘hate propaganda’. This also will be against ‘group’ or a ‘person from that group’. Therefore everybody is free to incite hatred only against Hindus by publishing, communicating, making signs or visible representations. They will not be liable under this Act, because Hindus are not included in the ‘group’!
8. Hate propaganda.– Notwithstanding anything contained in any other law for the time being in force, whoever publishes, communicates or disseminates by words, either spoken or written, or by signs or by visible representation or otherwise acts inciting hatred causing clear and present danger of violence against a group or persons belonging to that group, in general or specifically, or disseminates or broadcasts any information, or publishes or displays any advertisement or notice, that could reasonably be construed to demonstrate an intention to promote or incite hatred or expose or is likely to expose the group or persons belonging to that group to such hatred, is said to be guilty of hate propaganda.
Who is behind it?
The leadership is totally in the hands of Mrs. Sonia Gandhi, who is all set to thwart the hindu community since long. Time and again it is evident. Emminent journalists, writers have written articles over it. e.g. ‘Italian by birth and Catholic by baptism’ by John McLithon. (http://vikramwalawalkar.blogspot.com/2011/04/italian-by-birth-and-catholic-by.html) 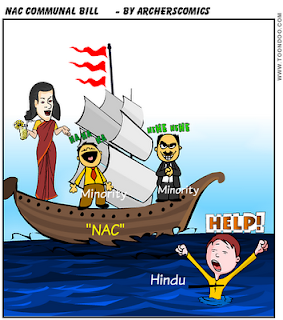 courtesy: strikingarrow.com
The puppets in the hands of Mrs. Sonia Gandhi are taking ahead her agenda. Two committees are responsible for preparing this Bill. National Advisory Council (working under PMO) and Drafting Committee. NAC contains 19 members. People like Asgar Ali Engineer, Justice Suresh Hosbet, John Dayal, Sayed Shahabuddin are the members among others. One Sister Mary Scaria is also member of the abovesaid NAC. A person who is vowed by Jesus and is out on a mission for propagation and spread of Christianity, is a member of this NAC. The Drafting Committee is also packed with such members who are known for their Hindu hatred. Teesta Setalwad is member of the Drafting Committee. Now should I say anything more about it? Can such communal people with stereotype mindsets design a proper Bill? They are bound to attack the Hindu community under the garb of protection of minority people.
Opposition to this Bill:
Every prudent person should oppose this Bill. We should place our dissatisfaction on record by various available means. We should write letters to newspapers, our MP, PMO etc. Such articles like this one should be forwarded, So that the Government will not attempt to table this Bill in the Parliament.
If at all it gets tabled and passed, then the President will give her assent instantly, without any hesitation. She may delay Afzal Guru’s mercy petition, but will sign this Bill within no time! In such a calamity we should move the Court challenging the Constitutional validity of this Act. Court may strike it down by declaring it unconstitutional on the basis that fundamental principles enshrined in the Constitution are being flouted.
Nationalist organization RSS' Sarsanghchalak underlines the danger and strong opposition to this Bill.
Concluding remarks:
The Bill poses some serious questions due to the deplorable provisions it contains. One cannot imagine that a Government considers particular community as ‘communal’. It keeps a particular community outside the purview of the Act. Labeling certain community as of terrorists’ is nothing but a beginning of creating future terrorists. The Act, if at all passed, will prove an instrument responsible for the ‘making of terrorists’. It seems that the Government sincerely feels that Hindus cannot be terrorized or targeted, but infact they are only responsible for communal tensions, attacks and targeted violence happening. What a mockery of fate of otherwise peaceful, tolerant and cultured community in their own country – the Hindu nation! May be it is so because the Hindu community is essentially peaceful, tolerant and cultured.
References:
1.     http://www.nac.nic.in/communal/com_bill.htm
2.     http://nac.nic.in/pdf/pctvb_amended.pdf
3.     Communal & Sectarian Violence Bill, 2010 Advisory Group - http://www.nac.nic.in/communal/advisorygroup.htm
4.     Drafting Committee - http://www.nac.nic.in/communal/dc.htm
5.     http://www.indianexpress.com/news/rethink-the-communal-violence-bill/818096/0
6.     http://articles.timesofindia.indiatimes.com/2011-06-11/india/29646714_1_communal-violence-farah-naqvi-internal-disturbance
7.     http://centreright.in/2011/05/communal-violence-bill-a-conspiracy-by-nac/
8.     http://www.legallyindia.com/Blogs/Entry/the-ugly-truth-behind-the-communal-violence-bill-2011-please-forward-it-to-as-many-people-as-you-can
9.     http://strikingarrow.com/2011/06/03/communal-bill/
Special Thanks:
Adv. Satyajeet Joshi, Adv. Ramchandra T. Walavalkar, Shri. Hemant Parasnis, Shri. B. S. Damle, Shri. Sameer S. Barve.
Posted by विक्रम वालावलकर. at 1:03 PM 27 comments: